LeRon Barton is a widely published author on race, mass incarceration and dating. He is    40 years old and African-American.

Key topics on the show are: 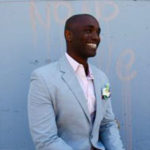